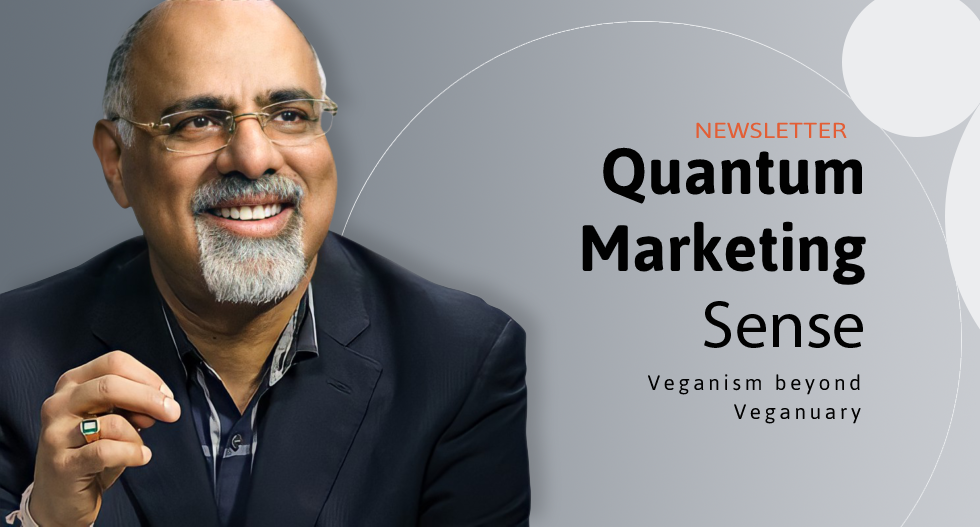 We are at the verge of a massive and unprecedented level of disruption, driven by a slew of new and powerful technologies, a tsunami of data and tectonic cultural shifts. These will usher marketing into its Fifth Paradigm.

When evaluating your future marketing strategy, you need to look at all three of these areas – new technologies, data deluge and the cultural shifts. You must understand what is happening and why, what the implications are, and how you can leverage those opportunities in a quantum future.

While several of my past newsletters have talked about technology and data (stay tuned for more here), I am going to focus today’s article on a significant cultural shift that is silently and steadily happening — veganism.

Put simply, veganism is a lifestyle based around avoiding products derived from animals. Veganism is not just about food — it’s a way of life.

While there have always been plant-based diets, they were more on the fringes or were a niche play at best. But, Veganism is clearly going mainstream in recent years. Three primary factors are driving it forward to be a global trend that you cannot ignore: compassion for animals, care for the environment, and personal health and well-being. Each of these are profoundly impacting how people evaluate their habits and lifestyle.

Many people believe that it is cruel to indulge ourselves in eating in ways that necessitate harming animals. You can agree or disagree with this way of thinking, but it’s important to recognize that an increasing number of people are following the trend. There are vegan restaurants, menus and options that are cropping up quickly, across most large cities as well as tourist destinations – clearly a response to the rising demand for vegan food.

When it comes to the climate, it has been established that beef has double the carbon footprint of the next highest polluting food. Cows eat grass, drink water, produce large amounts of methane, and are, all-in-all, an environmental net negative. Plants, on the other hand, have a fraction of the impact. As the awareness around sustainability practices goes global, many people are looking to see how they can help at an individual level. Veganism is one such measure. Again, you may argue whether this is a correct perception or not, but you cannot ignore it.

Year after year, more doctors and world-class athletes discuss the benefits of a plant-based diet. While giving up meat has direct health impacts, such as decreased risk of heart disease, plant-based foods offer direct upsides. Tennis great Novak Djokovic even attributes much of his career success to his decision to transition to a plant-based diet. I expect that we will see and hear much more about this as we continue gathering data in the coming years.

This desire to avoid consuming meat products has led to the birth of major companies like @Impossible Foods and @Beyond Meat. Major restaurants and brands are also jumping in. Places like the world-renowned @Eleven Madison Park deserve a lot of credit for going fully vegan (kudos @Daniel Humm for persevering despite the mixed reactions). And the largest fast food brands now have vegan options — including the recently announced @KFC chickenless chicken and @McDonalds McPlant burger. Clearly, big changes are happening!

WHAT THAT MEANS FOR MARKETERS

Veganism isn’t only about eating — it’s about being. It’s about carrying your values and beliefs into every aspect of your daily behaviors and life.

The lifestyle aspect of veganism is starting to manifest in pop culture. @Hugo Boss has released vegan suits and shoes, @Dole Food Company has started making vegan pineapple leather, and singer Billie Eilish convinced famed designer @Oscar de la Renta to stop all fur sales in exchange for wearing one of their dresses to the Met Gala.  Many brands of personal care products such as shampoos proudly display that their products are “cruelty free” i.e. they have not been tested on animals. And that has a strong appeal to many consumers.

All of these efforts bring important media attention to sustainable business practices. Companies are starting to realize that their old methods of operating will soon be untenable; people are starting to realize that plant-based diets can give them a leg up on the competition. We will see many forward-thinking, daring, climate-conscious brands offer vegan products in the coming years. It’s an important growth avenue.

This is a segment rapidly growing in population and influence. There is a fascinating opportunity here for marketers.

We know that people increasingly want to align their consumption habits with their values — and that they are increasingly willing to put their money where their mouth is. Inevitably, many roads will lead to veganism.

There is a growing movement to raise awareness of veganism by referring to January as Veganuary.

Whether you believe in veganism or not doesn’t matter. Whether you think veganism is right or wrong doesn’t matter. It’s what many consumers believe and it’s the direction significant segments of consumers are moving towards. As a marketer, it’s your job to recognize that reality and meet consumers in a way that is authentic to you and your company.